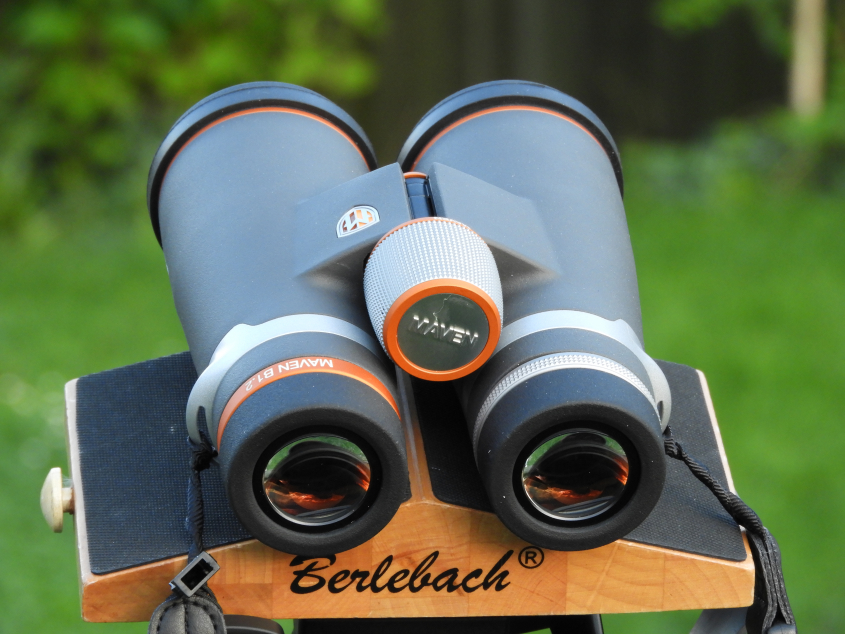 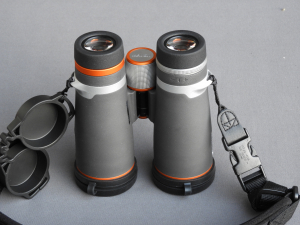 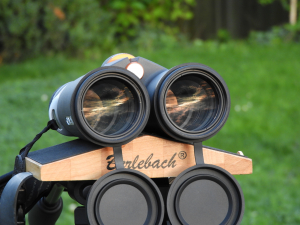 Lander, Wyoming – home to 7500 souls and outdoor company Maven. Maven, selling directly to end consumer without intermediaries, has a good reputation for riflescopes, spotting scopes and binoculars, which it assembles in USA from components made in Japan. It offers a very customized service. You don’t like the grey armour with orange rings? Order an all-grey model, or a black one, or combine several colors. The  B1.2 models, an 8×42 and a 10×42, are recently updated versions of the former B.1 series: they come with more field of view, higher transmission, a shorter near focus, and are more compact and lightweight. The specs of the 8×42 are almost identical with those of the new Zeiss SFL 8×42 (see separate post, https://binocular.ch/11383-2/), although the Maven is a bit heavier than the Zeiss. Mechanical functions are impeccable, optical performance is in all respects excellent and comparable to the competition even from Leica (Trinovid HD, see separate post https://binocular.ch/leica-trinovid-8×42-hd/) or Zeiss (Conquest HD, see separate post https://binocular.ch/zeiss-conquest-hd-8×42/),  and the Maven could even be a match for the SFL, or very close (to be further tested/confirmed). At half the price of the SFL, the B1.2 offers very good value for money. 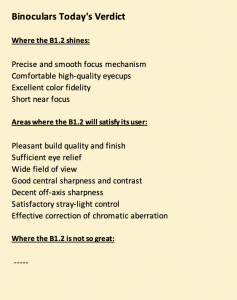 The new Maven B1.2 8×42 was a big surprise for BINOCULARS TODAY. We just had finished reviewing the new Zeiss SFL 8×40 (see separate post, https://binocular.ch/11383-2/) when we got the new Maven model in hand.

The B1.2 model recently replaced the previous B.1 model and has wider prisms, more FOV, more transmission, less weight and is shorter.

What was so surprising was the fact that the Maven B1.2 not only shares a number of essential specifications with the Zeiss SFL, we also found its image characteristics – central sharpness, edge sharpness, CA correction, color tone – to be so strikingly similar that we reviewed the two binoculars side-by-side.

We think the data speak for themselves. The biggest difference between the SFL and the Maven we found are:
– Maven’s external design is “traditional” and quite different from the SFL
– Maven weighs about 3 ounces more than the SFL and is bulkier
– Maven has a “traditional” position of the focus wheel close to the eyecups

Optical performance: in all relevant respects, the Maven matches the performance of the SFL or performs very similarly. CA correction is equal: almost none in the center of the image, quite little further out. Stray-light control is again quite comparable, and both binos exhibit similar “minor double spikes” on very bright light sources.

Maven claims over 3 percent more transmission than the SFL (close to 94%).

Maven’s AFOV is a tiny bit larger (61 degrees) than the 60 degrees of the SFL (due to a slightly more pronounced pincushion distortion), but panning experience is very similar.

Edge sharpness is again very comparable, and so is sharpness on-axis (confirmed on the USAF with 4x and 6x boosters; mounted on separate tripods side-by-side, there was no winner or loser between the two).

Color rendition and image brightness is amazingly similar in both binoculars. Even the viewing experience is amazingly similar, despite the difference in weight, ergonomics and body shape. Switching back and forth between the two, often mounted side-by-side, we almost got the impression that the makers of the Maven tried to mimic the image of the SFL (but we are sure that’s not what happened!).

Mechanically, we found no fault with the Maven: tight central hinge, smooth and precise focusing, just slightly slower than  SFL, and comfortable screw-in eyecups with 4 positions (in, two intermediate click-stops, out). Nothing else to complain.

Regarding design, we like the color combination grey/orange; you may not, so the Maven comes in a number of other design configurations. 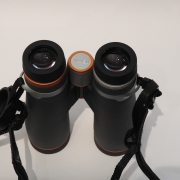 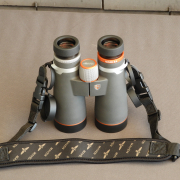