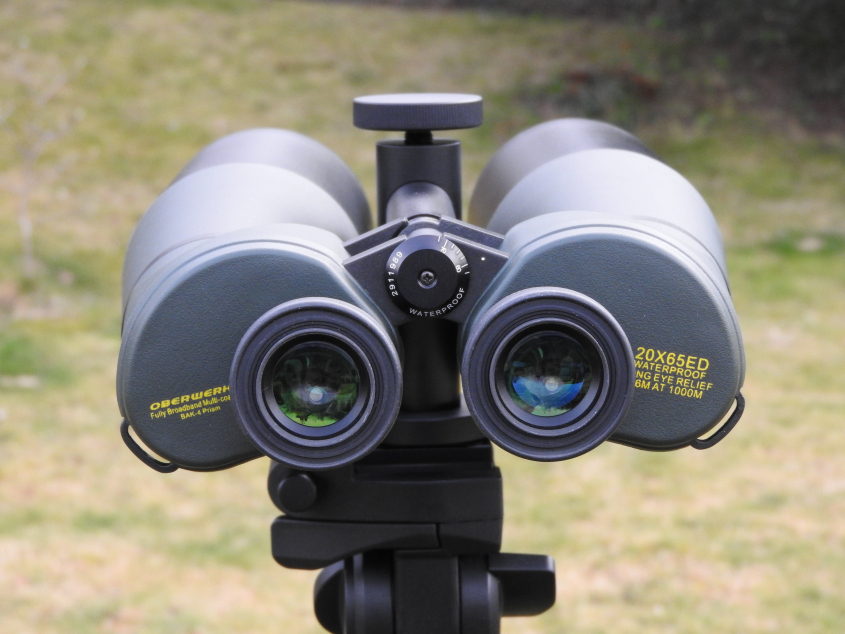 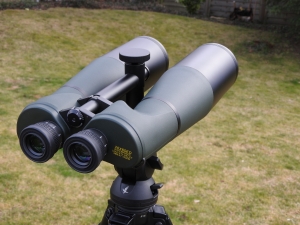 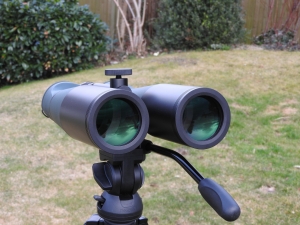 The 20×65 ED is a relatively new addition to Oberwerk’s range of binoculars. According to Oberwerk, it is intended to follow in the footsteps of the legendary Takahashi 22×60 (discontinued some years ago), which means the 20×65 should provide particularly good correction of chromatic aberration and good edge sharpness. At the same time, the 20×65 Oberwerk features a much wider field of view than the Takahashi did. The 20×65 is a mid-price instrument that comes into a market of 20x binoculars – mostly 20×60, 20×70, and 20×80 – with a number of competing products in all price categories. The Oberwerk is both heavier and larger than almost all other 20x instruments; perhaps that was necessary to achieve good CA correction. In fact, the Oberwerk exhibits almost no color fringes, whether on axis or towards the edge of the image, better than competing ED binos. In addition, sharpness is very good for about 90% of the field. Initial user reviews on the internet confirm this positive impression. The 20×65 is a further example that shows how good China-made binoculars have become now even in the quality segment of the market. 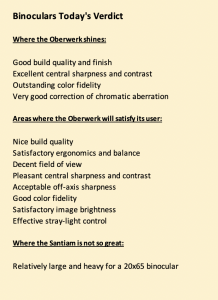 A Brief Comparative Review of the Oberwerk 20×65 ED Deluxe

A FIRST LOOK AT THE OBERWERK 20X65 ED DELUXE

The following are the three instruments compared in this brief review

So, two APMs against one Oberwerk (but as you will see, it wasn’t too unfair, the Oberwerk fought quite well).

Since Oberwerk mentions on their website that the 20×65 is “…. our take on the legendary, but discontinued, Takahashi 22×60 …., I was not expecting a short, compact instrument, but the length of the 20×65 still surprised me, see it next to the APM 20×80.

The following link kindly provided by CloudyNights forum member terraclarke recently shows nice pictures of the same instrument as the Oberwerk 20×65, but apparently sold under a private label brand-name “Forrester”:

The 20×65 comes well finished, the back part lightly rubber armored and in military green and with nice haptics, the front end in black painted aluminium. It comes with a sturdy pre-installed center mount that allows easy balancing when tripod mounted.

Everything mechanical works well and smooth. The external diameter of the eyepieces  is 45mm, 5mm less than those on the APMs (both the 70 and 80 appear to have identical eyepiece dimensions), which makes it slightly easier for people with narrow IPD to fit their nose in between. The diameter of the eye lens, however, is only 0.5mm apart, 21.5mm in the Oberwerk, 22mm in the APMs.

The folded down eyecups on the Oberwerk reveal a filter thread on which usual astro or other eyepiece filters can be fitted. That is a very nice feature!

Eye placement on the eyepieces is comfortable; I prefer the folded down position of the eyecups actually to comfortably see the entire field of view (same on the APMs).
The “official” eye relief spec for both APMs is 16mm, for the Oberwerk it’s 18mm, but all of these are obviously measured form the surface of the eye lens.

Measuring the eye relief myself (effective, i.e. measured from the rim of the folded eyecup) with the dynameter, I get about 11mm for the Oberwerk; the APM 70 has about 2mm more, the APM 80 3mm more. I observe without eye glasses and have no problems with the Oberwerk, but the 11mm might just be a bit “tight” for eyeglass wearers (?); to be checked further.

In the 20×65 as well as in the two APMs, the area around the exit pupil looks nothing like the ideal “round white spot surrounded by black”; in all three of them, quite a lot of lighted structures and more or less false pupils appear, maybe slightly more pronounced in the Oberwerk than in the APMs. There is only little vignetting, again in all three more or less the same

True aperture: according to APM, their 70 ED and 80 ED operate at full aperture. The same is true for the 20×65, according to Oberwerk: in the list of technical data for the roughly 20 binos mentioned on the website, only 5 are said to operate at 100 % aperture (this has been the subject of a separate discussion here on CN), and the 20×65 is one of them (I might test this at some point myself, just to sleep well … 😉

The reviewed samples of all three models appeared well collimated.

Putting the Oberwerk 20×65 ED Deluxe, the APM MS 20×70 ED APO and the APM MS 20×80 ED APO side-by-side on tripods, the following were my eight main points of interest:

Field of View
3.3 degrees in the APM 20×70 and 20×80, 3.2 in the Oberwerk 20×65. Translated into m/1000m, that is 58m vs 56m, so quite a small difference. However, in the field, I found the difference noticeable, both at daytime and at night. In the APMs, the Pleiades appear surrounded by slightly more nightsky, which makes them stand out a bit more nicely, than in the Oberwerk. Not a huge difference, but a difference.

Image brightness
During the day, I could not make out any difference in brightness between the three contenders. The Oberwerk with its 65mm lenses appears as bright as the APM with 80mm. The brightness of the Oberwerk is further “enhanced” by its absence of any color tint; white appears very white (see paragraph on “color fidelity”).
At night, when the eye pupils are dilated, the APM 20×80 shows a slightly brighter image of the nightsky than the Oberwerk. The latter is more or less at par with the APM 20×70. Of course, a brighter nightsky may generally present both advantages and disadvantages. However, here the APM 20×80 also seems to show slightly more faint stars in open clusters such as M45, or at least those faint stars seem a nuance brighter than in the Oberwerk 20×65.

Central sharpness / contrast
No substantial difference among all three instruments during the day. The Oberwerk gives crisp, contrasty images of e.g. a cemented wall covered with a rough paint, or of structured pieces of bark on trees, and neither of the APMs provides more or better detail.
At night, nice point like stars in the Oberwerk, both the brighter ones and the faint ones. M42 exhibits quite a bit of structure within the nebulous area, with 3 of the 4 trapezium stars immediately identifiable in the Oberwerk, the 4th one at least guessable (a lot depends on eyesight here as well). The Oberwerk shows the nebula slightly less bright than the APM 20×80, but not with significantly less detail, since the sky background appears a bit brighter in the APM. The image of the APM 20×70 appears comparable to the one of the Oberwerk, there is little difference, if any, in terms of brightness or contrast, at least for my eyes.
As mentioned, the narrower FOV makes the Pleiades appear slightly less brilliant in the Oberwerk than in the two APMs, not much, but enough to recognize a difference.

Peripheral sharpness
Day and night, edge sharpness is really good in the Oberwerk. Point-like stars throughout most of the image. Blur starts to appear only very close to the edge of the image. There, and only there at the very edge, sharpness in the Oberwerk appears slightly worse than in the two APMs. After much comparing and reviewing, I found that until about 80% out from the image center towards the edge, the image of the Oberwerk seems actually slightly sharper than that of the APMs. Again, not talking about huge differences, more like nuances. In essence, edge sharpness is really good in all three.

Chromatic aberration
This is the area where the Oberwerk clearly rules, in my view. I could not provoke noticeable color fringes in the central parts of the image, neither on crane arms against a bright sky background, nor on tree branches, nor on shiny objects. I do not remember having seen better CA correction in a high magnification bino. Moving toward the periphery of the image, you can provoke color fringes if you try hard enough, but correction appears again very good. The two APMs are both not bad in this discipline, but both show clearly more color than the Oberwerk. The difference is immediately recognizable. Presumably, the very long body of the Obie and slower focal ratio result per se in less chromatic aberration (nothing gets around physics laws)?
At night, CA is not a big issue unless one observes bright objects, such as the moon, or perhaps bright planets such as Jupiter. Observing the moon without essentially any of the usual color fringes at the edge of the disk is a real pleasure in the Oberwerk. The APMs are themselves quite color free already, but the Oberwerk is a further step up in my view.

Color fidelity
Right when I started observing with the Oberwerk 20×65, its image appeared “bright and white”. The paper test confirms that the image is “whiter” than in the APMs, which themselves show quite little color tint; but compared to the Oberwerk, the APM 20×70 and even more the 20×80 appear to have a slightly warmer color tone in their image. This is definitely true for daylight observations. At night, the difference is less apparent; all three instruments show nice color nuances on the different types of stars.

Stray-light control
During the day, observing against a low standing sun, even with sunlight directly shining onto the front lenses, the Oberwerk and both APMs exhibited various types and all sorts of passing reflections when panning the binocular, but observation remained always possible and the image never “faded out” or got covered with a glaring veil. So, overall satisfactory performance, and I could not determine winners or losers.
The same is true at night. In the Oberwerk like in the APMs, you can get the occasional reflection from bright objects such as the moon; e.g., when panning the binocular around the moon disk, keeping it just outside the field of view. Nothing major, though, and not as intrusive as in certain other instruments. Observation of objects relatively close to the moon remains possible.

Ghost images
These (more or less sharp images of bright objects caused by reflections on air-glass transitions) are another form of stray-light. As far as I can say, they seem not an issue in either the APMs or the Oberwerk.

Summarizing my impressions, these would be conclusions in form of a table (there is a total of 6 points in each category, the best performing binocular gets 3 points, the next best 2, the last one 1; in case several binoculars rank equal, their scores are averaged): 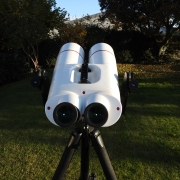 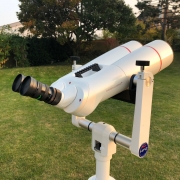